As Fundy’s giant tides erode the towering sea cliffs and wash the shores, many interesting rocks, fossils, zeolites and semi-precious stone are revealed. With its fascinating geology dating back hundreds of millions of years, the Bay of Fundy is paradise for geologists.

While combing the beaches at low tides, a trained eye will easily spot such finds as fossils and zeolites. Other discoveries may include amethyst, agate, calcite, coal, copper and jasper and, depending on which section of the Bay of Fundy being explored, one may also discover 200 million year old basalt formations or 350 million year old Carboniferous rock or rocks from the Pre-Cambrian or Devonian periods. These treasures are replenished annually as Fundy’s giant tides beat against and erode the cliffs that line the Bay.

Here is what Ken Adams, Director/Curator of the Fundy Geological Museum in Parrsboro, NS, lists as the top ten geological attractions specific to the Bay of Fundy region: 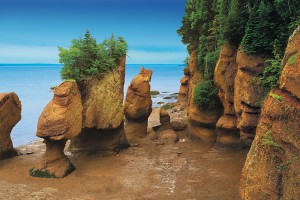 Ken also recommends checking out the geological highways maps produced by the Atlantic Geoscience Society for an extended list of regional geological highlights.

“The diversity of geology along the Bay of Fundy could stand on its owns as a ‘must see’. The cross section of geological time exposed by the tides highlights the formation and subsequent break up of Pangaea, and the evolution of the Bay, over the last 400 million years, into the structure we know today. Examples of a wide variety of geological and paleontological processes can be found along Fundy shores. Continental drift and plate tectonics, igneous intrusions and volcanic eruptions, changing climates, ancient environments, the development of the plant and animal life, the world’s oldest reptiles and Canada’s earliest dinosaurs, the list goes on…” – Ken Adams, Director/Curator, Fundy Geological Museum, Parrsboro, Nova Scotia, 2006.

As with any topic, numerous articles have been written over the years detailing the uniqueness of Fundy’s geology. For the reading pleasure of our geologist friends, we offer a list of recommended books pertaining to the geology of the Bay.

I recently visited New Brunswick and the Bay of Fundy. Inside the SEA CAVE, at the very rear, was a large light green boulder imbedded in the sandy floor . What exactly was this beautiful boulder? Thank you.

Apparently the main features of Hopewell Rocks are:

“Tides, Erosion, Glaciation” The rocks aren’t the water, and all the water does is ensure that half the time the rocks are invisible, which I will grant is an improvement; the glaciation was over long ago, and is technically less evident due to the fact that most of the rocks here are actually missing. Though if glaciation formed the strata, I will have to give it that. Though you can see that anywhere along the coast, with less risk of it falling on you; I can’t argue about the erosion, I just wish it would hurry up.

Can anyone tell me what the heck is the interest about Hopewell rocks. Of course anything is interesting, tells a story, is distinctive, but what is the deal with these piles of mud. The Lost arrow pinnacle in Yosemite, OK, I get that. There are limestone pinnacles the size of hopewell rocks in Ontario. NB has beautiful formations in granite. I realize coming at this after 48 years of climbing, I am a bit of a solid stone extremist, but can anyone come up with a reason why this is one of the main tourist attractions in NB, or maybe the Maritimes, and it is so lame. People from Asia are being jammed on buses and taken out to the Hopewell rocks. For goodness sakes, have you seen the pinnacles they have in China, or Thailand, or Vietnam. Ridiculous. It isn’t even the #1 geo attraction in NB. And one has since fallen down.

Hello,
We are staying at Five Islands Campground and at low tide we can see a thick layer about 12 feet of reg mud with trees trapped inside at about four feet above the sea level. What happened to trap these trees in the mud?
Thank you.

I’m planning a trip to New Brunswick soon & I wondered if it’s illegal to collect rocks, minerals and fossils there?

Hi Tania, rocks are definitely fair game and I would assume minerals are as well (but I am not a 100% sure about that). As for collecting fossils, you need a permit in Nova Scotia, but I am not sure about New Brunswick. Try asking the folks at Stonehammer (http://www.stonehammergeopark.com) as they would know for sure and would also be able to direct you to the best sites.

I was wondering if there is a geologist around can tell me what a huge chunk of Amethyst is worth One big cathedral at that.( all six flat sides to one point)

A geologist wouldn’t know how much amethyst is worth. Miners who sell amethyst would know or gem dealers who buy rough stone. Mineral collectors might have a good idea as well.

Heard about a giant beaver tooth found on deer is, anybody know where? I’m from there originally& hope to go back for a visit soon.

Two questions:
-what are the best beaches in NB for beachcombing…one(s) that would have the greatest success of finding amethyst ?
-is there a good site for fossil hunting that is easily accessible and where you can keep the fossil? Thanks!

I’m really not sure about amethyst in NB.. I know you can find it in the Parrsboro area. I’ve had great luck find sea glass on beaches along the shore of Campobello Island. I would say the Fundy Isles (Grand Manan, Campobello and Deer Island) are the best for exploring. New River Beach is a beautiful sandy beach to walk along.

As for collecting fossils. I know you need a permit in Nova Scotia, but I am not sure about New Brunswick. I would try to contact the folks at Stonehammer (http://www.stonehammergeopark.com). They would know for sure and would also be able to direct you to the best sites.

Can you give me an idea as to what can be found on Parlee Beach in Shediac?

It’s mostly a beach people go to for tanning and swimming (because the water is relatively warm there). As far as the geology, there’s a lot of sand and sand dunes. This post might give you a slightly better idea of the beach’s geological features and history: http://www.geocaching.com/seek/cache_details.aspx?guid=ec7273c4-7da3-4d2a-bb3e-6bffd11119ae