The Bay of Fundy is home to the rare tidal bore phenomena, where tides overpower the stream of outflowing rivers.

Twice a day, at high tide, a large volume of water floods from the Bay of Fundy into the rivers that feed it. The narrow river banks compress the rising waters in a spectacular surge and a visible standing wave, sometimes 1 meter (3 ft) in height! As the roaring and swirling water races upstream at speeds close to 15 km per hour (10 mph) it generates rapids in its wake that are between 3 and 3.5 meters (10-12 ft) high. Learn more about the tidal bore »

Most rivers draining into the upper Bay of Fundy between Nova Scotia and New Brunswick have tidal bores. Most of them are located on the Nova Scotia side of the bay, but you may have trouble finding them without the help of some locals. A few great places to see a tidal bore are:

Visitors usually like to visit the sites with some interpretation panels like the ones found along the Maccan River and the Shubenacadie River near the South Maitland Tidal Bore look-off. It’s also important to know that the bore time does not necessarily match with the high tide times listed on a tide chart. It all depends on exactly where along the river you are watching, so it’s best to check with some of the local outfitters beforehand. 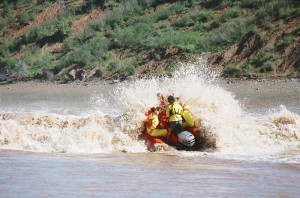 As interesting as it is to watch the tidal bore from the shore, it’s even more fun to go white water rafting in it. This experience is unique to the Bay of Fundy because the Shubenacadie River, located in Nova Scotia, is the only place in the world where you can go tidal bore rafting. In the summer months, experienced guides take visitors on a one-of-a-kind, upriver rafting adventure. These adventures often also include an extremely fun mud sliding session. Tidal bore rafting might just be the best way to experience the Bay of Fundy tides first hand!

Fundy’s tidal bore is interesting but it’s not the only way to ‘see’ the tides: plan to view the vertical and horizontal tide range too, for the full tidal experience.

I have a twin brother, dieing of leukemia, who’s bucket list in life included the bore tides on the bay of Fundy. I am on a cruise this week, Maine, N, NB. Any way I could experience the bore for my brother? Warren Tinker, cell 731-234-4431.

Looks like great fun. However, I’d want to surf it. Any chance of providing some support via zodiac for a few folks interested in surfing the bore? Size and location depending, we’d have to show up with longboards…. or even SUPs if the wave is small. Any thoughts?

I have never done rafting before and doesn’t know swimming. Appreciate your thoughts. Thanks!

I’d love to do this but am prone to seasickness. Would I be ok or am I better to skip this one?

It’s a pretty wild ride but you don’t have the typical motion that induces seasickness, so I think you’ll be alright to partake in this one. You’re also in a zodiac so there’s very little side to side sway.

I have severe motion sickness and was very worried on my tidal bore rafting adventure and I am here to tell you I was 100% fine. Don’t hesitate you will absolutely love this adventure!!!

Maps to go alongside the commentary would have been helpful.

Is this something a couple who are mid-lifers, sorta good shape and never been rafting before could do? Appreciate your thoughts. Thanks.

Definitely! As long as you can sit in a boat and hold onto a rope you’ll do just fine. They use motor powered boats so there’s is very little physical activity. It’s guaranteed to be a bumpy ride though! I’ve done a few of these rafting trips myself now and I’ve seen kids with their grandparents do this on several occasions. I highly recommend it, it’s a great time.

Is there a schedule for the tidal bore arrival at hebert and maccan parks? Thanks!

Not that I am aware of. The closest estimation would probably the tides posted for the Moncton area (http://www.waterlevels.gc.ca/eng/station?sid=175). As you can see, there’s unfortunately nothing available for the Amherst area (http://www.waterlevels.gc.ca/eng/find/zone/30). You might be able to estimate it based on the tide tables for a location closer to the Herbert river, however, keep in mind that the time for the tidal bore actually falls somewhere in between the listed times for low and high tide. The exact time also varies depending on where along the riverbank you are.

Can you surf or stand-up paddle board this? I wonder…

Yes you can surf the initial wave and keep in mind you’ll get the best waves around new and full moons. But don’t expect too much of it. The best part of the tidal bore are really the rapids that form in its wake and you’ll need a boat to enjoy those. If you’re looking for the ultimate tidal bore surfing experience, try the amazon river in brazil: https://www.youtube.com/watch?v=4ZuZiLuHM1A

Do you do group sessions (approx. 20 people)?
If so, how much would they cost?

We (bayoffundy.com) don’t organize these tours ourself, but I know that most tour operators offer group sessions (and rates). For instance: https://raftingpark.certifiedsecure.info/rafting.php or http://tidalborerafting.webs.com/2011prices.htm

Just wanted to update your link to Tidal Bore Rafting Park (May 13, 2011 posting). The link you added has been replaced with this one:

Thanks Vaughn. I actually just booked a 4 hour rafting tour with them for August 3. Can’t wait to do this again.

Hi Mike,
This is the current web address for Shubenacadie River Runners.
http://www.tidalborerafting.com

Thanks Kim, I’ve also updated your listing on our website (https://www.bayoffundy.com/place/shubenacadie-river-runners/)

Can children under 10yrs of age do the rafting?

Yes, most tour operators advertise tidal bore rafting as being great for all ages. As long as the children can hold onto the boat by themselves it should be fine. And everybody will be wearing life vests, just in case somebody does let go (which can be a lot of fun).