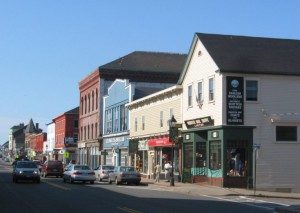 A working seaport for nearly 250 years, Yarmouth is also home to an extensive collection of fire fighting memorabilia in the Firefighter’s Museum of Nova Scotia and an interesting lighthouse at Cape Forchu.

Guiding vessels into Yarmouth Harbour since 1840, the original Cape Forchu Light was replaced in 1962 with today’s slender tower resembling an apple core. A wonderful place for a picnic, over 12 acres of well-groomed grounds surround the Light, allowing visitors to appreciate the magnificent ocean scenery and providing great photo opportunities.

Visit the light keeper’s house and tour the museum to hear tales of the past, learn of the keeper’s duties and see interesting memorabilia. There is also a gift shop and canteen on site. Named Cape Forchu, meaning Forked Cape, by Eric the Red and Samuel de Champlain who discovered the site, this Light can be found 11km (seven miles) outside of the Town of Yarmouth.

Less than twenty kilometres from Yarmouth, Ellenwood Lake Provincial Park lays nestled between two lakes in the heart of southern Nova Scotia. This 280-acre park offers its guests an excellent opportunity to enjoy the outdoors in an utterly tranquil environment. Take a leisurely stroll through the trail systems, paddle along the shores in a canoe or take a refreshing dip the Lake’s clear waters.

Imagine the clang of the fire bell, the smell of smoke and the hot steam surrounding you. The Firefighters’ Museum of Nova Scotia chronicles the history of firefighting through out the province. View photo, recollections and thousands of artifacts. The museum’s collection includes vintage pumpers, hose wagons and ladder trucks, antique toy fire engines, uniforms and an extensive assortment of shoulder crests, patches and badges from around the world.

Two popular exhibits within the Museum are the 1863 Amoskeag Steamer, one of the oldest surviving steamers in Canada, and the 1935 Chev Bickle Pumper. One thing is for sure, you do not have to be a firefighter to appreciate the memorabilia at the Firefighters’ Museum of Nova Scotia.

Inside Sweeney Museum discover various artifacts from companies owned by the late Lawrence Sweeney, a gentleman who represented the Yarmouth’s fishing industry many years ago. The museum was designed to give visitors the feel of a working fishing dock and therefore many materials used were salvaged from the Yarmouth waterfront.

An award-winning museum, the Yarmouth County Museum strongly emphasizes the country’s rich seafaring history. While visiting the museum, discover the third largest ship portrait collection in Canada, one of the largest costume collections in Nova Scotia, the largest non-institutional archives in the province and five distinct period rooms. As you stroll through the museum view over 20,000 artifacts that document regional heritage including china, glass, furniture, toys, tools, models and musical instruments.

Other items of interest to be found within the museum’s extensive collection include an electric chair, stagecoach, lighthouse lens, Runic Stone and Acadian loom. If you are in search of more specific information about Yarmouth County, visit the archives to look through various documents, newspapers, photographs and genealogical materials. In addition, the Yarmouth County Museum also operates to nearby Pelton-Fuller House and the waterfront’s Killam Brothers Shipping Office.