The diversity in the history that has played out along the shores of the Bay of Fundy is as dramatic as the tides themselves.

The region is marked by the Aboriginal, French, English, American Loyalist and Irish peoples that have populated it throughout the years. Each has maintained a strong presence in the area as evident in the local culture, name places, traditions and architecture. 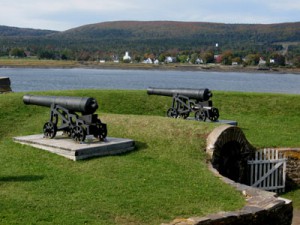 A small island off the Bay of Fundy became the first European settlement in North America in 1604.  Led by Sieur de Mons and accompanied by Samuel Champlain,  and 79 men attempted to settle St. Croix Island.  The first winter was tough on the explorers with ice flows cutting the new settlement off from the main land. Half of the men died of scurvy.  The following summer they moved across the Bay to Port Royal in the present day Annapolis Valley, Nova Scotia.

Mi’kmaq: The Aboriginal Peoples of Fundy

The aboriginal people that lived in and around the Bay of Fundy spoke the common Algonquin language, and were of the Mi’kmaq, the Montagnais, the Algonquin, the Attikamek, the Nipissing, the Abenaki, the Ottawa and the Ojibway tribes.

Read more about these great peoples:

In 1783 the Treaty of Paris ended the American Revolution and approximately 40,000 Loyalists fled New England to establish a new life in Europe, England and other parts of British North America, including such Bay of Fundy neighbourhoods as Saint John and Weymouth. Read more about the Loyalists who settled on Fundy’s shores…

Discover the historical activities available along the shores of the Bay of Fundy.

Why is thought that Fundy is named after split or funnel?

Hello i am under the water plz help me

If anyone is interested there is a wonderful group on FB called Advocate Harbour…..they share so much amazing history!

Hi.I have a question.Who declared that ther would be national park near the bay of fundy?

Happy Holidays! I have a question: what was the original first name of the Bay of Fundy? That is to say, what is the Native aboriginal name of it that predates all the French or Portuguese names it has been called. 🙏🏻 Thanks so much 😄
Maggie

MAKES MORE SENSE IT BEING NAMED BY THE PORTUGUESE , BAIA FUNDA MEANING DEEP BAY , PORTUGUESE WERE IN THIS AREA AS EARLY AS 1501 OR EVEN A LITTLE EARLIER FROM WHAT I HAVE READ

My great Grandmother Emily Landry (born 1859) grew up on a large seaside farm on the Bay of Fundy. As I understand it, she was removed and relocated from the area and eventually found her way to Chicago. She never wanted to discuss what happened, her husband was presumed lost at sea because I guess he ended up on a different ship? Anyway, I’m wondering what event this could have been? I know the British relocated people in 1755 – 1763, but am not aware of what other events occurred…. Thank you in advance for any info. -Cynthia

My grandparents lived in Parrsboro, Nova Scotia and my father was born there. My grandfather was a master ship builder, his name was Burton Dyas. I was told that the ship builders worked on the ships when the tide was out and the ships were resting on dry land ( I suppose that was their “dry dock”). Years ago, when I visited my aunt in Parrsboro, she showed me a daily work log which my grandfather had kept on his employees who worked on the ships. He utilized one of his horses to haul lumber and that horse was listed in the log as Horse Dyas and was paid an hourly wage, which of course went to my grandfather. I wish I could remember what that wage was but I have forgotten. Parrsboro is a quaint little town, I have cousins who still live there. I wish to return some day.

Am a truck driver, and have been traveling all around Ontario for many years. I then have moved into Qubec area north south and east area. Lately a bigger step down threw N.B. and into Nova Scotia. The city of Halifax has been a main dest for del and p/u but history of my home land of Canada has always interest me. On arriving home in my spare time checked out info on Woodstock N.B. the frist town made in N.B. I will be in full contact with this company for future knowledge. 1 question would be how long has it been known of blue white sharks located in and around Bay of Fundy

how did the bay of fundy get its name?

There’s some disagreement about that. Some believe the name comes from the French word for split (Fendu), others say that it originates from the Portugese word for funnel (Fondo).

My great grandfather was drowned in the Bay of Fundy in 1900. His name was James Cole and he was a fireman. The ship, City of Monticello went down and he, with it.
I understand now why the ship wasn’t able to handle the amazing sea in the Bay of Fundy. I had no idea, and I was born in Massachusetts!
I would like to know more about the incident and will be seeking out more information about the Acadians, as I have many ancestors.
Thank you for all the information about the area and people – I appreciate it.

You’re very welcome and thank you for sharing your message with us. Have you stumbled across the following story yet? It’s about the sinking and it names all those aboard by name: http://www.losttothesea.com/stories.php

when was the bay of fundy discovered and does any one know when fundy became a national park?

Probably around 1604, when a small island off the Bay of Fundy became the first European settlement in North America (https://www.bayoffundy.com/about/history/). I believe Fundy National Park wasn’t established as a National Park until 1948.