Many have ranked the Bay of Fundy above Australia’s Great Barrier Reef when examining the extensive and exceptional pyramid of the marine food-chain it has created, and as a consequence, the broad and diverse range of creatures it attracts.

The wondrous and unparalleled tides of Fundy are the engine which powers not only a constant and repetitious erosion mechanism but one which fuels, nurtures and supports one of the great natural ecosystems of the world. At least eight species of whales are to be found in the Bay of Fundy, including the Minke, Humpback, Baleen, and the endangered Northern Right Whale.

With the powerful tides that ceaselessly flush and churn the rich nutrients along the coastline, the whales feast on the enormous amounts of krill, squid, and schools of young herring, pollock and mackerel that abound here. Further, the Bay of Fundy is a preferred location for whales to give birth, both for the abundant food and for the protection that the Bay provides. We have a separate page devoted to the Bay of Fundy Whales where you can get more information about these magical creatures.

In recent years, Whale Watching has become an extremely popular day adventure for thousands of tourists visiting the Fundy region. From boats hugging the coastlines, visitors can view at close range the spectacular acrobatics of the whales, as these massive mammals breech, lunge and cavort as they feed, play or just show-off. These whale watching tours also offer a front-row seat to life here in its myriad of marine lifeforms – shrimp, herring, seals, seabirds and whales.

Descending the remarkable succession of species we encounter the smaller toothed-whales, including playful porpoises and dolphins, seals, several varieties of sharks, and a plethora of fish (including shad, flounder, tuna, sea sturgeons, salmon, cod, herring, pollack, hake, haddock and halibut) as well as lobsters, crabs, scallops, shrimp and sea urchins. All of the smaller forms of sea life are drawn and held to the Bay by the rich abundance of algae, plankton, and krill – the veritable foundation and substructure of the remarkable biological chain. Little wonder that the Fundy fishery generates more than 200 million dollars annually, making it the most affluent fishery region in Atlantic Canada. As such, the commercial fishing stocks are monitored by Canada’s Department of Fisheries and Oceans to ensure the sustainability of this remarkable resource.

Other Mammals Of The Bay Of Fundy

The Bay of Fundy is the main breeding ground for this porpoise. It’s the smallest cetacean in the Bay of Fundy and grows to 4-6 feet in length. Harbour porpoise are locally known as the “puffing pig” due to the spouting noise they make as they exchange air at the surface. Some characteristic features are their rounded snout, small triangular fin and they tend to jump out of the water when a boat approaches.

White sided dolphins grow 6-10 meters, have a tall dorsal fin, pointy snout, characteristic yellow strip along the side, black back, and white belly. Their exuberant behavior is a pleasure to watch as they play in the bow wave of the vessels. 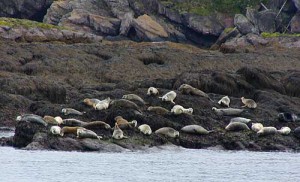 These seals are 5 ft in length and average 200 lb. Grey to brown or black in color with mottled spots. Infants may be white and learn to swim very soon after birth. Harbour seals have cute large round eyes with a cocker-spaniel look to the face. They are best viewed on the seal rookeries or rocky ledges at low tide. They are known to be curious and will take a look at passengers on board of the whale watching tour boats. They compete with the fishermen for the herring fish stocks.

Gray seals weight up to an incredible 800 lb. and have a “horse-like” snout appearance. The young are white and remain out of the cold water for 2-3 weeks until they have accumulated enough of a fat layer to protect them from the cold water.

For more information and photography on creatures found in the Bay of Fundy visit the links below:

Canadian Splash: Diving into the Bay of Fundy’s Tidal Whirlpool

Hi I’m doing a project on the bay if there is any extra information that you can give me I’ll be so grateful thanks. I like everything that you put down but I find the tide paragraph is hard for me to understand. I hope you can help

We were kayaking this weekend (Aug 26/18) and something rather large jumped out of the water in front of us. Didn’t look like there was a fin but not sure what it was. Do seals behave like that? We have not seen them behave like that and we are there rather frequently. We were probably between Keyhole and Big Bald Rock in Cape Chignecto when it happened. No shark sightings for us 🙂

While bass fishing just below the Harvey dam in Albert County 3 weeks ago three grey seal heads bobbed up out of the water. I was pleasantly surprised never heard of seals in this area and l have lived here 40+ years. The seals heads were grey and quite large. Have heard of them out on Grindstone Island shore but not in this far.

“White sided dolphins grow 6-10 meters” > What kind of freakish dolphins do yo have swimming in the bay?

I copied the answers for my bay of fundy project.

Thanks this helped with my oceans project

Hi- we are intrigued by the massive tides and abundant wildlife in the area… are there “tide pools” we could explore with the kids or is the tide too extreme? Would love to see some anemones, sea stars, crabs, etc…

yes there is, you can go to saint Andrews beaches

Some years ago, I found a baby seal stranded on Alma beach. It was white with large golden patches on its back. I’d like to see a photo of something similar. What kind do you think it was?

Thanks for sharing Karen. With regards to your seal question above, that sounds exactly like a harp seal except that the Bay of Fundy isn’t part of their natural habitat (so it’s highly unlikely that’s what it was). I’d really need to see a photo to be able to tell you more.

I saw a 10 foot long seal sun bathing yesterday in frenchman’s bay, look black in color with an unusually long nose(compared to harbor seals). Any idea what type seal this is?

Hi Sherri, most likely a grey seal (Halichoerus Grypus). The grey seal has a longer/straighter head compared to the smooth round head of a harbour seal.

My husband and grandson were swimming in Noel Bay (Cobequid bay of BofF) when a seal popped up not ten feet behind them! It seemed curious about them but needless to say, they got out of the water quickly and it swam away. Is it unusual to have a seal so far inland?

Hi Barbara, that’s a pretty amazing experience. I’ve personally seen a lot of seals up close from a kayak, but never that far up the bay — I am not sure if it’s uncommon though. The folks at the Huntsman Marine Science Centre would certainly be able to give you a definite answer though: http://www.huntsmanmarine.ca.

Barbara. I like in Quispamsis NB and sail in the Kennebecasis River. We see harbour seals many km into the river system here.

Last Tuesday, we were in Carrs Brook and decided to go for a walk on the beach. The tide was very low and we found what I thought was seaweed on the beach. I showed someone the picture and they said that they thought it was a sea anemone. I always thought that sea anemones were tropical. Are there some in the Bay of Fundy?

You may very well have seen a sea anemone. They’re quite abundant in the lower section of the Bay of Fundy. I’ve never seen any that far up the Bay, but that doesn’t necessarily mean they’re not there.

P.S. The first photo on this page shows anemones and other invertebrates on the rocky Bay of Fundy seafloor.