The mighty Bay can be either a modifying or an intensifying energy on climatic conditions over its great mass.

A fact of life to living in proximity to the Bay of Fundy is contending with two separate and distinct weather forecasts daily – one forecast is “coastal” the other is “inland”. Such is the peculiar effect that this large body of surging water has on its surrounding atmospheric environment, further corroboration of the overpowering forces at work here.

The waters of the North Atlantic ocean are cold – seldom exceeding 7/8C (44/46F) even at the height of summer. The Bay of Fundy takes in this chilled volume twice a day, maintaining a relatively constant water temperature. During the summer solstice, the cooling waters and perpetual breezes across the Bay produce a comfortable, refreshing atmosphere. However, just 8-10 km (5-6 miles) inland, once the breezes are affected by the radiated heat from the ground, temperatures are considerably warmer.

However, the reverse is not necessarily true in winter, when the Bay has a considerable modifying effect on the elements. 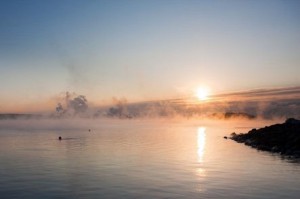 Being of heavy salt content, the Bay of Fundy does not freeze over, and further, the air over the water is heavy in saline content. And so these waters continue to play an active role influencing atmospheric conditions. During an inland winter snow storm the closer you are to the Fundy coast, it is common to see the precipitation change to freezing rain or rain.

The most conspicuous weather condition produced by the Bay is fog. Thick, damp, murky fog that can chum and wisp across the shores to permeate the lands and forests for miles. The fog is formed when warm, moist air moves off the land and over the cold Fundy waters. As the air cools, it condenses to form millions of microscopic water droplets in the air. Indeed, Saint John, New Brunswick is officially Canada’s second-most foggy city (the dubious top honour going to St. John’s, Newfoundland). 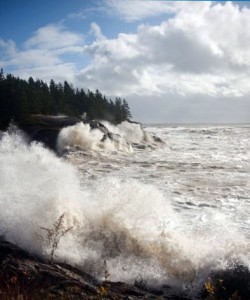 And despite the leading-edge technology and expertise of Environment Canada and the U.S. National Weather Service, the most qualified and accomplished professionals at reading the natural signs of the Fundy skies are the fishermen, the hardened men of grit and courage who make their living year-round on these sometimes treacherous waters. Talk to a Fundy fisherman – he’s not concerned about temperature (cold is cold, hot is hot), nor with rain, snow or fog (not with radar and GPS receivers). He is critically concerned about the one element that cannot be controlled or circumvented: the wind.

For the wind alone determines the mood, spirit and temperament of the Bay. Discover the natural activities available in and around the Bay of Fundy.

Is the Bay of Fundy frozen with the bad weather?

This morning we are experiencing very strong winds as a result of the storm that left snow and freezing rain. I can feel the house shaking….a lot as it is a post and beam building!!
I don’t know if these are hurricane force winds, but I don’t like it. I can imagine shingles
coming off. I’ll see when the sun comes up!

If I were thinking of visiting and perhaps retiring in the summer months in Nova Scotia, where would you recommend for warmer weather conditions especially by the sea? Is the Bay of Fundy colder then the Atlantic side?

The southern shore, on the Atlantic, from Yarmouth to Halifax, is the most desirable seaside area, and you’ll pay for it. The Fundy shore or anywhere on the Fundy side of North Mountain is cool in summer and has beautiful water views…just don’t go in. Like the article says, the interior around the area (aka “the valley”) occasionally gets toasty in summer, but cools down at night. Because of a burgeoning wine industry, the Fundy side of Nova Scotia is seeing a lot of growth in eco-tourism, and artisan-level farming, spirits, and food production.

What I’d like to know is: what is typically the foggiest time of year? Which season? Which month?

According to Environment Canada long-term data Saint John is the third foggiest city in Canada after Halifax by a considerable number of “fog days”.

Hi Derrick, thanks for your comment. Do you have a link to this information that you might be able to share? When this page was originally written the only other two Canadian weather stations that recorded more foggy days than the St. John station were the St. John’s station and the Halifax airport station. However, the Halifax airport is well outside the city and the city weather station (Citadel) didn’t record nearly as many foggy days. If that stat has changed in recent years, I’d be happy to update the information on this page.

Did I read in a Toronto travel section a few weeks ago, the ocean at Fundys Bay is the warmest water north of Virginia Beach, Va. Cant find that ad, did it exist? If so , is the swimming in the ocean comfy? Thx… Do you know where that ad was, as I have a small wager with my buddy who does not believe it, and need proof. Coming out to golf and fish L8TR. (and swim)…

I am not sure who placed that ad, but the Bay of Fundy is definitely not the warmest water north of Virginia. Keep in mind that the Bay of Fundy has extreme tides and as a result takes in a lot of cold water from the North Atlantic twice daily. The most you’re going to do here is go in for a quick and very refreshing dip.

That article would of been referring to the waters of the Northumberland Strait, the body water between New Brunswick and PEI. The water in the Bay of Fundy is cold in the warmest months.

There is a monument at Morden NS that tells about a young boy that crossed from the Island to the mainland to get help for the settlers on the island, and, they travelled back across the frozen water. – There is a plaque there, I was wondering what your thoughts would be on that.

I’m actually not aware of that story and plaque.

Here are some links to stories about, and pictures of the French Cross at Morden NS.
https://www.google.ca/webhp?sourceid=chrome-instant&ion=1&espv=2&ie=UTF-8#q=morden%20cross