The region that surrounds the Bay of Fundy is rich with stories from North American history. Home to the first European settlement in North America, the shores of the Bay became battlefields for the English and French where one man’s victory was ultimately another man’s tragedy. Many of these stories have been preserved and provide an abundance of historical activities within the region.

In a few distinct communities along the Fundy shoreline, observe the tri-coloured Acadian flag proudly flying from many homes and public buildings.

Travel the French Acadian Shore between Yarmouth and Digby, Nova Scotia. Set on the Baie Sainte Marie, the large community known as Clare was first settled by Acadians in 1768. The language spoken here today in reminiscent of 17th century French with an interesting twist of a few Mi’kmaq and English words. It is along this shore that you will discover one of the most celebrated Acadian churches.

Near the head of the Bay of Fundy, the Grand Pre National Historic Site commemorates Acadian culture and the Deportation of 1755. Featuring 14 acres of formal gardens, the site is home to beautiful monuments and statues. In addition, this 17th-18th century Acadian village is the scenic setting for Longfellow’s famous poem Evangeline: A Tale of Acadie.

In New Brunswick visit the birthplace of New Acadia. In Memramcook, a valley filled with history, culture and striking scenery, hear tales of the Acadian Odyssey when you visit Monument-Lefebvre.

In 1783 the Treaty of Paris ended the American Revolution and approximately 40,000 Loyalists fled New England to establish a new life in Europe, England and other parts of British North America, including such Bay of Fundy neighbourhoods as Saint John and Weymouth.

Immediately following the end of the American Revolution, 3000 Loyalists arrived in Saint John, followed by an additional 11,000 before the end of the year, establishing two settlements: Parr Town and Carleton. Today visitors to Saint John can retrace the steps of the city’s founders by following the Loyalist Trail, which includes a visit to the spot where the first Loyalists arrived in May 1783, the Old Loyalist Burial Ground in the centre of the city and Loyalist House museum.

Weymouth’s Loyalist history includes the arrival of many white and black loyalists with its most famous loyalist settler being Lieutenant James Moody. During the American Revolution, Moody risked his life recruiting, gathering intelligence and freeing prisoners from behind enemy lines and was even referred to as “that villain Moody” by George Washington. James Moody is one of Weymouth’s founding fathers.

Read more about the loyalist heritage… 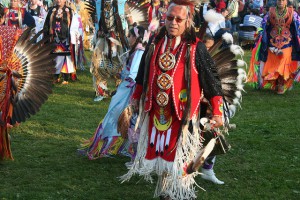 Long before the arrival of Acadian and British settlers, it was the native Mi’kmaq people who first lived on the shores of Fundy. Mi’kmaq legends show a genuine appreciation for the Bay’s uniqueness and explain the many mysteries that surround the various phenomena.

Mi’kmaq legend says that Fundy’s great tide was created when the man-god Glooscap decided he wanted to take a bath. Glooscap commanded Beaver to build a dam at the mouth of the Bay to trap the water for his bath. Whale was angered by this and demanded to know what had stopped the flow of the water. Glooscap then, not wanting to annoy Whale, instructed Beaver to break the dam, but Whale was too impatient. He began to break away at the dam with his tail and these great movements set Fundy’s waters in motion. To this very day the waters of the Bay continue to sway bath and forth.

There are also great Mi’kmaq tales to account for the creation of the Hopewell Rocks, Fundy’s towering sea cliffs, Nova Scotia’s Five Islands and the chocolate colouring of the Petitcodiac River.

Learn more about the history of the Bay of Fundy…

Typo or no typo? – To this very day the waters of the Bay continue to sway bath and forth.